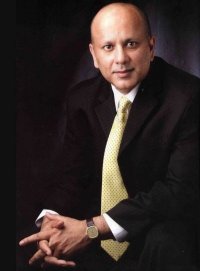 Latif Kapadia, my father, was larger than life, a man who was a national figure, a face familiar on any street of Pakistan. Having said that, I would add that he was my father before anything else. On the surface he appeared aggressive, secular, open-minded and an extrovert; on the inside, he was just like any other sensitive artist who wanted appreciation for his remarkable artistic qualities.

My first distinct childhood memory is of myself suffering from high fever with abba’s picture in my hand, waiting for him to come home. As usual, Abba was at the TV station, busy with one of his many rehearsals. My last memory of my father is more or less the same. It was the 28th of March, and I waited for him for lunch at home, a daily ritual. Little did I know that he was busy with the last recording of his life, for Anwar Maqsood’s play. I never met Abba again, for he died early Friday morning, March 29, 2002, two days after completing his 68th year.

It would be unfair for me to comment on his acting capabilities because for one, he was my father. Therefore, whatever I say would be biased and secondly, I am neither a critic nor an expert on the dramatic arts. Having said that, there was a time when he did ‘phir bhi hum jeetay rahey’ a stage play by Zia Sarhady, after which I proudly admitted to my school maters that Latif Kapadia was really my father. Until that time, I had never taken him seriously as an actor. I always thought acting was just a passion for him, a part-time persuasion. Watching him in the company of Talat Hussain, Naheed Siddiqui, Mehmood Masood and other leading actors, yet holding his own, convinced me that he was a great actor.

As a father, Abba was different! So what if he never demanded to see my report card after class 7, although I was the only son after four sisters, never put a curfew on my staying out late, never tried to understand my obsession with cricket, never asked me how I completed my MBA and not once inquired about why I switched jobs or resigned. The one thing he would always complain about was that I chose to study and work at the same time. One of abba’s sayings that will remain etched in my mind forever is “don’t bring me problems, bring me solutions.” The result of all this produced a son like myself who, although independent, realized the need of interdependence because it was my father who laid the basic foundation that kept me so upright and made me what I am without any sermons and lectures at any point in my life.
Abba’s like, I feel, was more cryptic than I realized. He taught me without teaching and his anguish took the form of humor. His humor touched people, making life an interesting place to be. With abba, life was never mediocre or superficial. I know this for sure and there are enough people who will readily vouch for it. My many sittings with Abba at the time seemed no more than ordinary chit chat and there was no shortage of subjects with him, but little did I know what wisdom or values were being handed over.
In life, you need a perfect balance between friends you can depend on and having the strength to make independent decisions. All I can say is Alhamdolillah, for I had a father who was Latif Kapadia.

Of half baked truths’ Blatant lies and lack of respect

In Quest of Happiness